Well Kiribati was a bit of a stumper when I fished it out of the box – where is it exactly? I knew it was somewhere in the Pacific, but couldn’t be specific! Which that reminds me of a old song my mum used to sing…..

“I joined the navy to see the world, and what did I see – I saw the sea! Well the Pacific wasn’t terrific and the Atlantic ‘s not what it’s cracked up to be!”

Anyway, Kiribati is a group of very remote coral atolls and one island in the middle of the Pacific Ocean, which may be better known as the Gilbert & Ellice Islands. They were a British colony until independence in 1979. One of the group, is (claimed to be) the largest atoll in the world, and Caroline Island renamed Millennium Island is the first place in the world to get the new day or a new year, hence the name change in 2000.

Because the islands are formed from coral, soil is scarce and very poor quality, few crops are able to be cultivated except coconuts, bananas and root vegetables such as taro and yams. Apart from abundant fish and seafood, and some tropical fruits like papaya most food has to be imported including the now staple rice.

Kiribati is one of the very poorest countries in the world, with virtually no resources and due to it’s remoteness, tourism is low. But it does offer world class fishing, surfing and diving in pristine waters. Interestingly Robbie Louis Stevenson stayed here for two months in 1889, when the islands were ruled by the self appointed tyrant king Tem Binoka, later Stevenson wrote about him in “In the South Seas”.

So the local food : quite hard to track down anything that sounded appealing. I looked at several different sites, including the helpful & informative  –  www.globaltableadventure.com ,  www.196flavors.com and q-zine.blogspot.com.au/ – you go girl!

Cooking is pretty basic, a popular method is wrapping foods in leaves and cooking with heated rocks in the ground like a Maori Hangi. Flavours are simple and ingredients limited, so in the end we cobbled together a few recipes that represented Kiribati to us.

These red yams, not to be confused with sweet potatoes – I boiled till tender, then glazed with a mixture of honey and butter. Weren’t that good, probably should have roasted the yams which is how my mum used to do them in New Zealand (and I loved them). The vegetables were simply steamed and a mix of commonly used veggies on other Pacific islands: cabbage, carrots, and green beans.

Sad to say this Kiribati meal ranked only 2/10, our lowest score ever.  The fish curry barring the sweet potato which had an unpleasant texture and no flavour – was bland and palatable at best and the yams – not good. Ah well it’s all a learning experience. Better luck next time ! 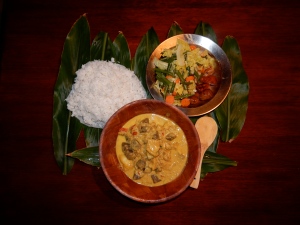 Wow! What a contrast – this dish was sensational! My daughter made this and we all absolutely loved it, couldn’t get enough of this salty peppery moist and tasty chicken. We really recommend this recipe and it will become a family favourite for us.

Guessing you all know where Taiwan is, or you should! Just across the Taiwan Strait from China it was named Ilha Formosa or ‘beautiful island’ by the Portuguese, and had the Dutch East India Company and the Spanish set up trading posts there. Super quick modernisation means the now industrially advanced Taiwan boasts the 19th largest economy in the world.

Still much of the interior of this hilly island remains undeveloped and forested. It looks like a great place to visit with tons of stuff to see and do.  Taiwan is rich in food resources and the diversity in cooking shows the different cultural influences. Fresh produce especially the abundant seafood,  and clean light flavours that allow the natural goodness to shine, is key in Taiwanese cuisine.

To make this we combined two great recipes from rasamalaysia.com/taiwanese-salt-and-pepper-chicken/2/ and www.foodrepublic.com

2. Heat the oil in a wok for deep-frying. Coat the chicken with the cornstarch evenly. Deep-fry the chicken until golden brown, remove from the oil and set aside.

3. Pour the oil out and add the basil leaves and stir a few times before adding the chicken back into the wok. Remove from the wok, add the salt mix and toss well with the chicken. Serve immediately.

All this fantastic dish needed was some plain rice and some stir-fried green vegetables, we used baby bok choy and snow peas. We all could have eaten a lot more Taiwanese Salt & Pepper Chicken and rated it top score- 10/10!  You have to try it too – you’ll love it!