My Bangladesh experience – what’s the difference between a bus and an airplane?

In Bangladesh – not much! Technically I haven’t been to Bangladesh – although we spent half a day there – inside Shahjalal International Airport in Dacca. Years ago, my husband and I were flying from Thailand to India and Biman Airlines was the cheapest flight. You know how in Asia, all the busses and trains are loaded up with passengers, and any conceivable thing that may need transporting, live pigs, dried fish, fresh durian! huge bags of sponges, firewood or whatever………well when we boarded at Dacca, all the locals carried all that stuff on board the plane!

Huge bags of stuff littered the aisles, there was a live pig in there too I think, or was it chickens? To our total amazement, the cabin crew  just let them bring it on board. But at take-off time, the Captain came out and walked down the aisles, kicking stuff out of the way and declaring loudly ‘that he would NOT take-off’ unless all this stuff was moved or stowed away!’

Like that was going to happen – there was so much luggage and it was so big, no way any of it would fit in the overhead lockers. After a few more kicks and stern warnings, a few things were wedged under seats and we were cleared for takeoff! As we banked steeply, all the large heavy items at the front of the plane slid down the aisle, crashing into seats – Holy Moly! It was unbelievable.

Don’t be afraid of curry

I’ve read a lot of posts about curry – and I’m amazed at how little people seem to know about it! I read a sad little post on an Indian food blog, asking “where did the curry flavour come from”, since there was no ‘curry powder’ in the recipe? And another post by a chef  advised his readers NOT to try making curry powder/pastes themselves as it was too hard and just to use  bought ones!! OMG This is so NOT  TRUE! To set the record straight – Curry is not hard,  not all curries are hot, all curries aren’t spicy, not all curries have loads of ingredients, you can even have dry curries.

Nothing more than a spiced sauce. The English word curry probably comes from the Tamil word kari meaning a sauce or relish for rice. Honestly don’t be afraid – it’s really easy to make delicious authentic curries from scratch and it doesn’t take much longer than it would, if you opened a jar of the bought stuff. Believe me, no bought curry paste no matter how expensive, will ever taste as good as what you make yourself with fresh ingredients.

Ideally use whole spices and grind them yourself (I use a coffee grinder or a mortar & pestle) but excellent results can be obtained from using bought ground spices and just toasting them a little (in a dry pan) to bring out the flavours and volatile oils. A blender makes short work of grinding slightly larger quantities of whole spices and add wet ingredients such as lemongrass, galangal, chillies, garlic and ginger to form curry pastes or masalas. Add water to make it all whizz together to a smooth paste and you won’t believe the fantastic aroma or flavour! Note: the water won’t affect the finished dish as it will evaporate during cooking process.

If you have always bought curry powder or ready-made pastes, please make your own next time – you won’t believe how easy it is!

A bit of background about Bangladesh – where is it?

Ah Bangladesh, literally Land of Bengal, also aptly known as the Land of Rivers. Once it was Bengal and part of India, then it was East Pakistan for a while, then became independent Bangladesh in 1971. Sitting on the world’s largest delta, with over 700 rivers including the three major ones that form the Ganges Delta flowing through it, the country is lush, green, very flat and very watery. It’s incredibly densely populated, Bangladesh has the 8th biggest population in the world. Regularly plagued with floods, famine and other natural disasters.

Relatively undeveloped means fewer tourists (it’s the least visited country in South Asia) but fewer tourist facilities. For the intrepid traveller, there are great things to see such as The Sundarbans, the world’s largest Mangrove forest and home to the magnificent Royal Bengal Tiger, The Pink Palace in the Dhaka, and a boat ride on the muddy Buriganga River from Sadarghat, a colourful chaotic seething mass of humanity afloat.

Tour tea plantations in the cooler hilly Srimangal region and relax, enjoying a first rate cuppa while in the Chittagong Hill Tracts you can visit Tribal Markets and for the adventurous go on guided Hill Treks through thick jungle to visit some of the minority hill tribes. 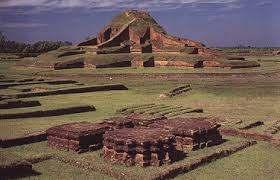 More important: What to eat – leave room for sweets!

What not to eat! Bengalis are famous for their warmth and hospitality and love of food! Their sophisticated cuisine is based on rice, dhal (lentils for those who don’t know) , vegetables and curry of infinite variety. From a plethora of recipes for me, stand out dishes are Bengali Matar Kachori – crisp deep fried breads stuffed with spiced lentils, Korma– a mild creamy nutty curry, Shahi Chicken Biryani – the supreme rice dish, Dim Bhuna – Bengali Egg Curry and Balti fish curry.

There is a huge array of breads, Luchi being a favourite, lentil and fish dishes and a particular fondness for pickles (Achar) and unusually for smoked foods like fish but vegetables too.  Many different cooking methods are used including Dum, steaming under pressure and Bhunnuna which is pan or oven roasting.

There is a version of Chinese 5 spice called Panch Phoran – panch is five in Bengali and phoran means spice. This is a mixture of 5 whole spices, in equal proportions of: Cumin, Fennel, Fenugreek, Black Mustard and Nigella or Kalonji Seeds. (Note: NOT to be confused with Black Cumin or Onion seeds).

Bangladesh (then Bengal) is the home of Indian sweet making and sweetmeats, many of them based on a rich creamy milk reduction called Khoya. Hugely popular, every region has it’s favourite speciality. If you have never had Indian sweets before, you really should hunt out a place that makes them, and give yourself a taste sensation. Rich, very sweet, decadently flavoured with almonds, pistachios, saffron and cardamon and often decorated with real edible gold or silver leaf called Vark, lots are fudge like. Or soft and custardy or fried fritters in syrups.

Many are difficult and time-consuming to make, and best left to the professionals. But definitely worth making at home is Payesh/Kheer,  a delicious creamy, spiced rice ‘pudding’ flavoured with saffron, cardamon and topped with nuts and toasted coconut. Totally delicious, I sometimes make it in winter on the weekend as a treat for breakfast.

I took this recipe from a cookbook of mine I use a lot – the food of india published by Murdoch Books. This recipe is very similar to a recipe for Bengali Mutton Curry  found at http://www.khanapakana.com  Unfortunately the night I wanted to make this recipe, we had a massive storm and I had to unplug the internet in case my computer got fried. So I used my own recipe.

With it I served a raita of cucumber, tomato, red onion, mint & chilli, plain steamed rice, lime pickle and mango chutney. We thought this curry was a pleasant every day sort of dish,  a curry you could often make and always enjoy.. Score 7/10