‘My daughter was excited to have picked Switzerland as her country this week, and despite the recommendations of both parents, Bunny was eager to make a Cheese Fondue. What is the appeal of fondue? Why do people think it sounds so yummy? An iconic dinner party dish from the 70’s,  I always loved those cute little fondue sets with their wooden fork handles each a different colour. I never bought a set though, because having had cheese fondue once, and disliked it – I never wanted to have one again! And yes, we have had it out at a Swiss restaurant and we still didn’t like it at all.

The Mystery of the Fondue

Let’s face it, you can only be fond of fondue …….if you’re Swiss. It’s the kind of very plain subsistence (one could say peasant) type food that is born out of harsh necessity. Developed during long, cold winters in Switzerland when the food started to run out, cheese fondue is an exemplary example of making a warm and filling dish out of scraps, in this case  – hardened old cheese, stale bread and a splash of wine.

I’m sure fondue is dear to so many Swiss hearts because they grew up with it. And like so many dishes you grow up with,  it’s comfort food. It becomes very nostalgic and isn’t just a dish, but your childhood and all the happy memories associated with it.  For those of us non-Swiss peoples, it remains a culinary  siren,  sounds so alluring but in the end you wish you hadn’t.

Not all Recipes are Created Equal – A Sad Fact but True

Undeterred Bunny went to enormous lengths to obtain the correct cheeses to make her fondue, and used vast quantities of bacon making the accompanying Potato Rosti. Using a recipe from the internet, Bunny spent a very long time making this dish. Now my daughter is only a young teenager, and while she loves cooking, is still only learning. One lesson she finds very hard to accept is that just because a recipe is online or even published in a book, doesn’t mean it’s a good recipe or that it will work! Also being methodical, Bunny likes to follow a recipe to the letter, which is normally good practice –  but she lacks the experience to tell when a recipe is badly written, and needs to be adjusted.

Sadly this was the case in our Swiss experiment, the fondue made with vast amounts of expensive cheese was really ghastly – so strong and so overly cheesy that we could hardly eat it.  I gamely ploughed on eating because she had gone to so much trouble- but Hubby and son gave up quickly. And the Potato & Bacon Rosti, exactly following the recipe,  was really greasy and had way too much bacon – and I love bacon! What a shame! All that hard work, not to mention the cost of the ingredients, wasted on a meal we could hardly eat.

How to Choose Good Recipes

My advice to all you cooks out there, be careful in choosing your recipes. Use well-known cookbooks that have been properly tested, preferably three times. On the Internet, use recipes from sources such as magazine websites, TV shows or food companies where the recipes have been professionally developed and tasted. Use your own common sense, analyse the recipe – does it sound yummy? are the ingredients in proportion? does the method make sense? If in doubt, make small quantities as a test batch. And finally don’t stop experimenting – just be prepared for a few failures!

I found this recipe on another lovely local site – http://www.georgianrecipes.net. One thing about this around the world cooking thing we are doing, is that only a few years ago, before the Internet ( yes there was life before the Internet kids!! Hard as that may be to believe! ) this would have been almost impossible to do. It amazes me that no matter how remote and little known some of these countries are (half the people I asked had never heard of a country called Georgia, or Comoros or knew where Somalia was )  there is a web-site dedicated to the food and culture of these places! OMG the world is getting smaller all the time. 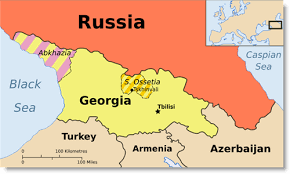 OK, so Georgia. Hands up those who knew it’s part of the former Soviet Union?  Tbilisi is the capital city, and the whole country has had waves of foreign conquerors from the Romans, Persians, Ottomans, Mongols and finally the Russian Empire.  The infamous Joseph Stalin was born in Georgia and it was once called Colchis and Iberia. Colchis is famed as the place at the end of the world where Jason and his Argonauts travelled to steal the Golden Fleece.

Now it’s more well known for the Krubera Cave – the deepest in the world,  over 600 glaciers in the Caucasus Mountains, many hot springs and 4 World Heritage sites including the medieval monastery complex at Gelati. And of course food – Georgians take their food very seriously and have a special traditional Feast called a Supra, which is led by a Toastmaster.

This national dish, Kubdari is a delicious meat-filled pasty, very much like a Cornish Pasty. Ideal to take on picnics, it’s robust enough to stand up to carrying around and I imagine it made a hearty meal for hungry peasants toiling in the fields all day.

Preparation (filling): Finely cube the beef and pork and add to a mixing bowl.

Finely chop the onion and garlic and add to the mixing bowl, together with 1 third tsp of powdered caraway, 1 quarter tsp of powdered dill, 1 level tsp of dried coriander, 1/2 tsp of blue fenugreek, 1 tsp of red pepper, and salt (amount dependent upon individual preference).

Use your hands to thoroughly mix and squash the ingredients. This helps to ensure that the pasty is juicy and the spices blend with the meat.

Preparation (dough): Kubdari requires a robust pastry.  To make it, add 400 ml of water (heated to 35 C) to a bowl and stir in the yeast.

Add 900 grams of flour to a mixing bowl and make a depression in the flour. Add the yeast water and a raw egg (optional). If you want the pastry to have a golden colour, add 1 tsp of sugar. The dough should be formed into a soft ball.

Cover the bowl with cling film and leave in a warm place for 2 hours for the dough to rise. Once the dough has risen, add 150 grams of flour and firmly knead the dough.

Cut the dough into 4 pieces. Shape into balls and the cover with cling film and leave for 10 minutes.

Roll out each ball  into large round, add 1/4 of the filling. Gather the dough together, pinching the top to seal it

Carefully roll the filled dough into a circular shape that is less than 20 cm diameter. Don’t flatten it too much. Bake on a flour dusted baking tray at 200 C until the dough becomes golden brown. The meat will cook inside in its own juices.

Serving: Brush each Kubdari with butter and serve hot.

With these pasties,  I served Georgian style red cabbage and buttered boiled potatoes with fresh herbs. My family all love pasties and pastries and this savoury stuffed Georgian bread was a hit. Simple but tasty, filling and moreish, definitely would make it again as it was quite easy to do and well worth it.

I was a little dismayed to have selected Somalia – wasn’t this an arid  war-torn and famine ridden country of little resources? What on earth do they eat in Somalia, that is, when there is any food available to eat? I imagined this could be another one of those countries where there is NO CUISINE just Food (if they’re lucky.)

The capital city is Mogadishu and Somalia is often thought to be the location of the fabled Land of Punt written about by ancient Egyptians. Famed for it’s gold, ebony and ivory, wild animals and the highly prized frankincense and myrrh so treasured by the Egyptians, it had a ‘golden age’ in the Middle Ages.

I was greatly surprised by this traditional dish from Somalia, not that it was so delicious, but that it was so similar to the more familiar Biryani’s or Pilafs from India or the Middle-East. Given where Somalia is located, in the Horn of Africa just across the Gulf of Aden from Yemen, I guess that shouldn’t have been unexpected.

The spicing was more subtle than the rich Biryani’s I’m used to, but it was equally delicious. I enjoyed making these Somali dishes, the soft spongy pancake –  like bread, Lahooh,  was fun to make and eat and the shredded vegetables were sort of like a cooked coleslaw. I found all these recipes on a very informative site called http://www.mysomalifood.com.  We ranked this meal highly and put it on our – ‘Would make again’ list.

Traditionally these are eaten in Somalia for breakfast with honey, and I can see this would be delicious. They remind me of a Dosa, also a delicious pancake type flatbread.

My daughter Bunny had picked Belize out of the box, another country we knew little about, other than it was in Central America. It’s famous for the Blue Hole – a fantastic natural  wonder made famous by Jacques Cousteau, the second biggest Coral Reef in the world and it’s stunning biodiversity. Over 60% forest, Belize is home to rich array of flora and fauna, including a Jaguar reserve.

Once the epicentre of the Mayan world, it has their spectacular ruins. Formally a British colony, it’s still a Constitutional Monarchy, and English is the state language.

After a bit of research she came up with a typical Belize meal that sounded nice, a stewed chicken, rice and beans dish. Unfortunately we weren’t able to get the Recado or spiced Annatto paste that gives this dish it’s distinctive rich red colour and probably a lot more flavour. So it ended up OK, but nothing to write home about. I think it was a bit bland for us, we all like big strong flavours and this pleasant, mild dish just didn’t do it for us.

Oh well,  onward – next week another country, and another chance to try something new and exciting!