WEEK 14 – Democratic Republic of the Congo

So this week I got Congo out of the box and decided I really wanted to make something a bit different – what about a soup? I’ll give it a try!

Its capital city, Kinshasa, was originally called Léopoldville in honour of King Leopold II of Belgium who controlled the Congo in the 1800’s, is the second largest French speaking city (after Paris) in the world. All schools, newspapers, government, television, magazines and street signs are in French. The city is located on the southern side of the Congo river directly opposite to the capital of the Republic of Congo, Brazzaville. It is the only place in the world, where two countries capital cities, face each other and can see one another on opposite sides of a river. 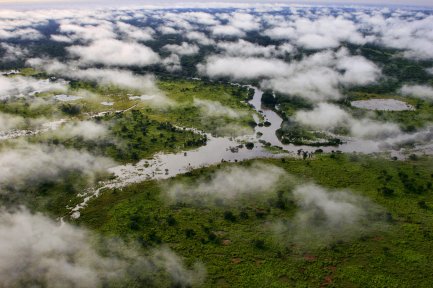 The Congo has five World Heritage Sites within its borders, four being National Parks and the other a Wildlife Reserve. Stretching over most of the country is a tropical rainforest known as the Congo Rainforest, it is the second largest rainforest in the world after the Amazon.

The Congolese cuisine heavily reflects the indigenous people of the country. Cassava is the staple food often cooked and eaten with other side dishes. . Meals typically consist of a starchy ingredient; cassava, sweet potato, taro, maize and plantain and rice, along with vegetables and meat in the form of a stew. Chicken with a Moambe sauce is considered the national dish of the Democratic Republic of the Congo. With less than 2% of the land able to be used for faming, Congo does not produce very much food on its home turf but imports quite a lot. The two most important crops for export are coffee and palm oil.

Having a look through some different recipes from the Congo I noticed we weren’t going to be able to get a lot of the ingredients needed to make some of the most commonly eaten dishes out so I looked further and found a recipe that sounded quite nice. Congolese Peanut Soup. At first I was going to serve it with the traditional bread staple Fu-Fu but decided to serve it with a nice dry-fried flat bread which Mimsey made. Recipe was sourced here: www.congocookbook.com

This is a classic chapati recipe based on one from food.com/recipe/chapati-east-african-bread

Chapatis made fresh, as they always were, are so delicious! Particularly loved the thick Millet Chapatis we ate smeared with honey in a village out in the Thar Desert. Namaste!

The soup was interesting it had a tomatoey, peanutty flavour and was really nice with the flat bread. It scored a 6/10 from the family.